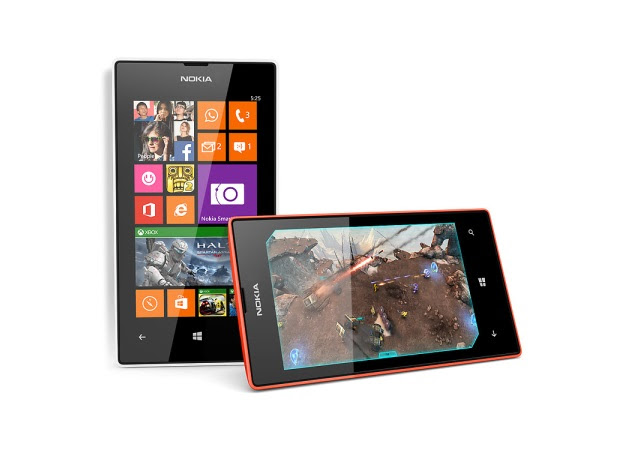 Nokia launched its budget windows phone namely Lumia 525 in India which is priced @ 9,999/-. It is available is Black, White, Red, and Yellow.

DESIGN, BUILD QUALITY & DISPLAY
The design of this phone is good. It has scratch resistant glass on front and a plastic back and feels good in hands. It is slim at 9.9mm and weighs 124gms. It has 4 inch WVGA IPS LCD display of resolution 480 x 800 with 233 ppi. The viewing angles are pretty good and sunlight legibility of the display is also pretty good. It runs on windows tile based User Interface. The brightness of the screen is great.

SOFTWARE, HARDWARE & PERFORMANCE
It runs Microsoft Windows Phone 8 (OS) out of better upgradable to Windows phone 8.1. It has a Qualcomm Snapdragon S4 (MSM8227) processor running a dual core 1.2 GHZ (Cortex-A15) with 1GB RAM and Adreno 305 (400MHZ single core) GPU. The performance is very good which provides number of graphic intensive games and multitasking run pretty well and there is no lag at most cases.

CONS
*App catalogue is still pretty less in comparison to android though 8.1 update has taken it in the right direction.
*No Led flash.
*No NFC.
*No front camera.

OVERALL PRODUCT RATING° : 8.3/10.
°overall product rating refers to all the aspects including the price, performance, overall quality, features, etc., based on individual product.
Arun BN
Hello Everyone, Welcome to GadgetGuruBN Website. This is Arun a.k.a TG. In this Website you will find Smartphone reviews along with this you will find few Car & Bike reviews & few Gadget reviews. Having 10 years of experience in smartphone technology, I always share my honest opinion on all the reviews i post on my GadgetGuruBN Website & ABN World Youtube Channel. So Subscribe & Follow GadgetGuruBN Website to never miss future updates. Also Subscribe my ABN World Youtube Channel [https://www.youtube.com/arunbn] to show your support & stay tuned for future updates. #GadgetGuruBN #ABNWorld #KoolBlueWallpapers