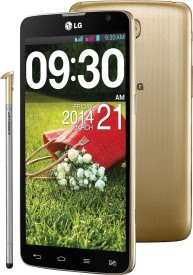 LG launched its midrange android smartphone namely LG G Pro Lite in India which is priced @ 20,990/-. It is available is Black, White and gold shades and aslo in dual sim option. 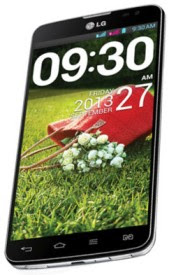 DESIGN, BUILD QUALITY & DISPLAY
The design of this phone is good. It has scratch resistant glass on front and a good quality plastic on the back and feels good in hands. It is slim at 9.4mm and weighs 161gms.
It has 5.5 inch QHD display of resolution 540 x 960 with 200 ppi and has a dedicated stylus. The viewing angles and sunlight legibility of the display is just good. It runs on LG's Optimus 3.0 User Interface. The display supports 5 mult-touch points and the brightness is pretty good.
STORAGE, MULTIMEDIA & CONNECTIVITIES
It has 8GB of internal storage which is further expandable upto 32GB. The device features dedicated multimedia apps which are pretty good.
Connectivities like 2G, 3G, Wifi a/b/g/n, dual-band wifi, wifi hotspot, USB OTG, Bluetooth 3.0 as well as IR(Infrared Blaster) are present But lacks NFC.
CAMERA & VIDEO RECORDING CAPABILITIES
It has a 8MP rear camera with autofocus and Led flash which features Simultaneous image and video recording, Geo-tagging, Touch focus, Image stabilization, HDR etc. The camera clarity is pretty good overall. Daytime the images are very good and has fine details respectively but in the night is where the noise starts to become more visible and to get better details at night HDR mode images with bit of steady hands helps to produce slightly better images. It does HD 720p@30fps video recording with video stabilization and stereo sound but lacks HDR having bit-rate of 9-11 mbps and stores in mp4 format. The video recording clarity is pretty good oveall. Daytime the video clarity is very good and has fine details respectively but at night video clarity is pretty descent could have been better. It also has a 1.3 MP front camera for selfe's the clarity is pretty descent.
PERFORMANCE AND BENCHMARKS
It runs Android (OS) 4.1.2 Jellybean out of the box. It has a Mediatek (MT6577) processor running a dual core at 1GHZ. Performance is Descent which provides number graphic intensive games and multitasking run quite well and there is no lag at most of the cases.
QUADRANT : 3860.
ANTUTU : 11146.
NENAMARK 2 : 45.5 fps.