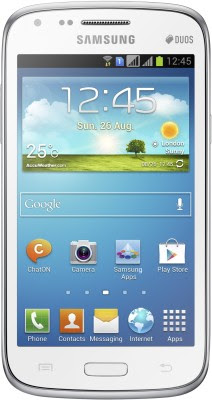 Samsung launched its lower mid-range android smartphone namely Galaxy Core in India which is priced @ 15,990. It is available is Blue and White shades. It is also available is dual-sim version.

DESIGN, BUILD QUALITY & DISPLAY
The design is getting simple day by day. It has a scratch resistant glass on front and a plastic soft touch finish on the back making it durable. It is slim at 9mm and weighs 124gms. It has a 4.3 inch 16M LCD capacitive touchscreen of 480X800 (WVGA) resolution with 217ppi. The viewing angles and sunlight legibility is good. It has Samsung's TouchWiz User Interface.

STORAGE, MULTIMEDIA & CONNECTIVITIES
The device comes with a 8GB internal storage and is further expandable upto 64GB. The device features dedicated multimedia  apps which are. On-board connectives such as 2G, 3G, WIFI, Bluetooth 3.0, GPS & GLONASS and USB are standard but lacks NFC.

CAMERA AND VIDEO RECORDING CAPABILITIES
It has a 5 MP Rear Camera with autofocus & LED flash which features Geo-tagging, touch focus, Image stabilization etc. The camera clarity is good. It does 480p@30fps video recording with video stabilization and stereo sound having bite-rate of 7-9 Mbps in MP4 format. The video recording clarity is good. It has a VGA Front camera.

SOFTWARE, HARDWARE, PERFORMANCE & BENCHMARKS
It runs on Android (OS) 4.1.2 jelly bean out of the box. It has a Qualcomm Snapdragon S4 Play (MSM8225) processor running a dual core at 1.2 GHZ with 1 GB RAM and an Adreno 203 GPU. The performance is good which provides high graphic intensive games and multitasking run smooth enough and there is no lag at all.
QUADRANT : 3290.
ANTUTU :7580.
NENAMARK 2 : 33.4 fps.

CONS
*Design is getting quite old.
*Video recording is only 480p could have been HD 720p.

OVERALL PRODUCT RATING : 8.2/10.
°overall product rating refers to all the aspects including the price, performance, overall quality, features, etc., based on individual product.

To Know The Current Price And To Buy This Phone Now! Click The Link Below.
http://www.amazon.in/gp/product/B00D8WDF22/ref=as_li_tl?ie=UTF8&camp=3626&creative=24822&creativeASIN=B00D8WDF22&linkCode=as2&tag=tecworphotab-21
Arun BN
Hello Everyone, Welcome to GadgetGuruBN Website. This is Arun a.k.a TG. In this Website you will find Smartphone reviews along with this you will find few Car & Bike reviews & few Gadget reviews. Having 10 years of experience in smartphone technology, I always share my honest opinion on all the reviews i post on my GadgetGuruBN Website & ABN World Youtube Channel. So Subscribe & Follow GadgetGuruBN Website to never miss future updates. Also Subscribe my ABN World Youtube Channel [https://www.youtube.com/arunbn] to show your support & stay tuned for future updates. #GadgetGuruBN #ABNWorld #KoolBlueWallpapers