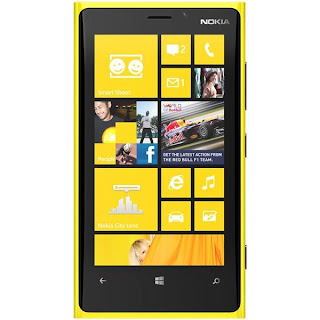 ﻿Nokia launched its flagship windows smartphone namely Lumia 920 in India which is priced @ 36990/-. It is available in yellow, red, white, grey and black shades.

DESIGN, BUILD QUALITY & DISPLAY
Nokia Lumia 920 is one of the good looking windows smartphones out there. The design is very simple but neat. It uses corning gorilla glass 2 front and polycarbonate body on the back making it durable. It has a 4.5 inch 16M IPS TFT capacitive touchscreen of 768x1280 (WXGA) resolution with 332ppi. It uses Nokia's clear black technology and pure motion HD+ technology. The viewings angles are good and the sunlight legibility is very good. It runs on windows tiles based User Interface.


STORAGE, MULTIMEDIA & CONNECTIVITIES
It has a 32GB internal storage and is not further expandable. But has a 7GB SkyDrive storage which would be enough I guess. The device features dedicated multimedia apps which are good. It also features Nokia city lens (that discovers cities around you). On-board connectivity's such as 2G, 3G, 4G (LTE), WIFI, Bluetooth 3.1, GPS & GLONASS, NFC and USB are standard.

HARDWARE, SOFTWARE & PERFORMANCE
It runs windows OS 8. It has a Qualcomm Snapdragon S4 (MSM8960) processor running a dual core 1.5 GHZ with 1GB RAM and an Adreno 225 GPU. The performance is very good which provides high graphic intensive games and multitasking run smoothly and there is no lag at all.

OVERALL PRODUCT RATING° : 8.2/10.
°overall product rating refers to all the aspects including the price, performance, overall quality, features, etc., based on individual product.


To Know The Current Price And To Buy This Phone Now! Click The Link Below.