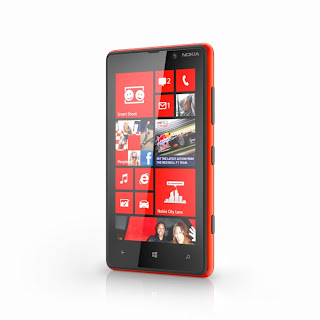 Nokia launched an alternate windows 8 smartphone namely Lumia 820 in India which is priced @ 26990/-. It is available in Yellow, Red, Blue, Violet, White, Grey and Black shades.

DESIGN, BUILD QUALITY & DISPLAY
Nokia Lumia 820 is a good smartphone available in various colours. The design is very simple but neat. It uses corning gorilla glass front and polycarbonate body on the back making it durable. It has a 4.3 inch 16M AMOLED capacitive touchscreen of 480x800 (WVGA) resolution with 217ppi.It uses Nokia's clear black technology. The viewings angles and the sunlight legibility is good. It runs on windows tiles based User Interface

STORAGE, MULTIMEDIA & CONNECTYIVITYS
It has an 8GB internal storage and is expandable upto 32GB and also has 7GB SkyDrive storage. The device features dedicated multimedia apps which are good. It also features Nokia city lens (that discovers cities around you).
On-board connectivity's such as 2G, 3G, 4G (LTE), WIFI, Bluetooth 3.1, GPS & GLONASS, NFC and USB are standard.

CAMERA & VIDEO RECORDING CAPABILITIES
It has an 8.7MP Rear camera with dual led flash which features Cinematograph, Geo-tagging, Touch focus, Image stabilization etc but lacks HDR. The camera clarity is very good. It does FULL HD 1080p@30fps video recording with video stabilization and stereo sound lacking HDR with a bit-rate of 16-18 Mbps in MP4 format. The video recording clarity is very good. It has a VGA Front camera.

HARDWARE, SOFTWARE & PERFORMANCE
It runs windows OS 8. It has a Qualcomm Snapdragon S4 (MSM8960) processor running a dual core at 1.5 GHZ with 1GB RAM and an Adreno 225 GPU. The performance is very good which provides high graphic intensive games and multitasking run smoothly and there is no lag at all.

CONS
*App catalogue is less compared to Android and iOS.
*No FM radio.

°overall product rating refers to all the aspects including the price, performance, overall quality, features, etc., based on individual product.